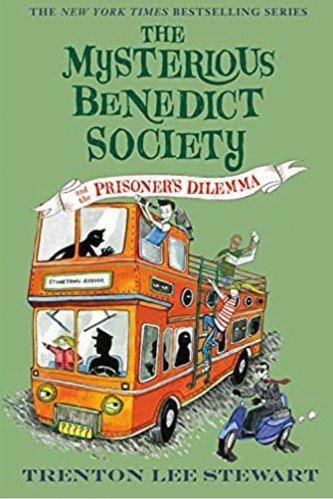 The Mysterious Benedict Society and the Prisoner's Dilemma

The final (or is it?) installment and adventure of the Mysterious Benedict Society! Mr. Curtain once again seeks to gain access to his Whisperer. To do so, he devises an ingenious plan that will ...

This book is probably my second favorite in the series. (You just can’t top the nostalgia that comes with the first book in a series.) Each member of the Society respects and values each other as a crucial part of the team. Reynie has learned how to lead, Sticky has learned how to be (at least a little) humble, Kate has learned so much about family, and Constance is perhaps a bit more agreeable. I love how they acknowledge their fear, but also choose to work through it together.

Reynie, Sticky, Kate, and Constance have all grown up so much, but their voices and defining characteristics have remained the same. As in the first two books, their reactions and thoughts seem realistic for their age, which is refreshing in an age of middle-grade heroes that talk like adults.

A consistent aspect throughout the series that I’ve come to appreciate is how the team respects the adults. Mr. Benedict is their wise leader that they turn to for advice but also as a friend.

Thematically, something that always sticks out to me is the emphasis on food and fellowship. At least in the first two books (I wouldn’t dare spoil this one), the closing scene is a gathering complete with food and laughter.

The discussion of truth and its value is also a prevalent theme that one might not expect in an adventure/mystery series. However, the battle between truth and deceit is a valuable discussion found in all three books.

One final element of this series that I appreciate is the titles. The prisoner’s dilemma is a moral and philosophical puzzle that the team discusses in the beginning of the novel. And although it might not be explicitly discussed after that initial exercise, the principles of it exist throughout the story. In fact, the “prisoner’s dilemma” is both literal and metaphorical by the end.

With espionage, adventure, action scenes, and difficult decisions, this is a series that readers young and old can enjoy.

This series will forever hold a special place in my heart as a childhood series that still impacts me today.

I could gush about this series for days (and I might eventually edit this post to include more gushing 😉 ), but for now, I’ll leave it at that!

Language – Some “swearing” without actual words, but that’s it!

Spiritual – Constance’s ability is developing, which involves telepathy, recognizing patterns (think Sherlock-ish), and changing other people’s minds (although it’s seen as something to be used with the utmost of discernment).

Violence – A wee bit of peril, but nothing more!

I’m a part of the Amazon Affiliates Program, so if you purchase The Prisoner’s Dilemma from one of these links, I may receive a small commission. Thanks!