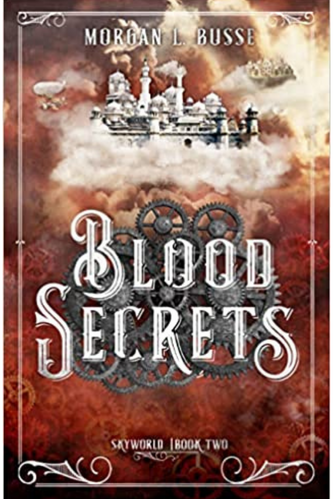 Greetings and welcome to my review of Blood Secrets by Morgan L. Busse!

Summer’s quickly drawing to a close, and it feels like just yesterday that I entered June with a TBR a mile long. Since then, my TBR’s only grown, but I have read some incredible books that I’m so excited share with you in upcoming reviews!

Oh, and a quick warning before you continue! This review may contain spoilers for the first book in the Skyworld duology, Secrets in the Mist!

If you haven’t read it yet, check out my review here: Secrets in the Mist Book Review

Not everyone wants to see the world saved . . .

Time is running out. Cities are being engulfed in the Mist and humanity is on the brink of extinction. Theo believes he has found a way to stop mankind from Turning, but he doesn’t know how to alter Cass’s unique blood into a cure. Or if it can even be done.

Meanwhile, Cass struggles with the idea that she is possibly the savior of the world—a world she is not sure is worth saving.

From the Winchester manse to the steel city of Decadenn, there is something more chasing Cass than the House of Lords or the masked man who can walk in the Mist. Soon she must decide if she will use her blood to save mankind or let those who only care about themselves perish.

Morgan L. Busse is the queen of characters. I’ve been reading her books since long before I started a blog, and I’ve always marveled at her ability to bring characters to life as she does. Cass and Theo are such intricately and lovingly crafted characters that I couldn’t help but root for them.

I also appreciated how this story lacks angsty, morally gray characters. Instead, it trades postmodern tropes for realistic inner struggles that both main characters grapple with even as they fight for the future of their world.

Another theme that is vividly portrayed is that of an individual’s worth regardless of station. Many of the upper-class members and leaders of the Five Families utterly disregard the lives of the lower classes. Their callous view of humanity is in stark juxtaposition to Theo and Cass’s and leads them to examine their own views, and the two struggle both inwardly and outwardly to discern truth from lies and fleeting feelings.

Cass also wrestles with how to face the reality of a twisted and broken humanity. She questions whether the world is worth saving, and her desire to do what is right wars with her sense of self-preservation and despair over the way the world is run. Her inner battle is well-executed and uniquely written. Instead of drawing inspiration from Marvel’s assertion in recent movies that humanity is flawed but still worth saving, Cass’s struggle acknowledges that humanity’s value comes from God (or Elaeros, as He is known in the steampunk dystopian future), mirroring reality.

Blood Secrets is arguably even more atmospheric than Secrets in the Mist, another aspect that drew me deeply into this sequel. Vivid imagery brought the Mist and the Daedalus to life and let the story soar to new heights.

This installment also held more political intrigue, and by the end, I never knew who we could really trust!

–WARNING– The next paragraph contains some spoilers!

My one complaint is that I wish the ending had been a little longer. I wanted answers to a couple questions (that are likely too spoilery to list here), and the ending felt a little out of sync with the pacing of the rest of the story (or maybe I just wasn’t ready to say goodbye to the characters yet). However, it was still an impactful ending, and I love how all of the character arcs ended! It ends on a hopeful note, and I appreciated how the author showed the new leadership being put in place, adding another layer of hope for a brighter future for the world. It always saddens me a little when the main characters save the world from ruin but then sail off into the sunset before establishing a new way of life for the people they saved, but not so here!

Sexual – A couple of kisses and a veiled reference to prostitution.

Violence – The Turned resemble zombies, so some descriptions of them may be jarring to younger readers. Several characters are wounded, and deaths are described as well.

I received an eARC in exchange for an honest review. All thoughts and opinions are my own.

If you’ve never read Morgan L. Busse’s work, might I recommend you start with my favorite series of hers?

Check out my review for the first book in the Ravenwood Saga here:

Mark of the Raven Book Review

That’s all for today! I’ll be back soon with reviews for all the wonderful reads I enjoyed this summer!