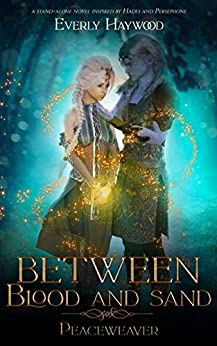 Greetings! Welcome to my review of Peaceweaver by Everly Haywood! Read the Review

Some books surprise you and sweep you off your feet before you even realize what’s happening! One moment you’re lazily scrolling through ebooks while sipping tea on a Saturday morning, the next you’re sucked into a new world and an epic journey, and that’s just what happened to me with Peaceweaver!

An indentured healer. A dying nobleman. A nightmarish curse that could destroy them both.

Young elf Persis Ophne takes pride in her gift of healing. Expecting to mend the ailing Prince of Gelaira, her world shatters when she’s informed her true undercover assignment is to murder the dark elf. And her unwillingness to break her oath to only use her abilities to heal takes a tricky turn when she finds herself falling for the already betrothed royal.Prince Haryk longs to be a worthy ruler. But when he’s struck with an inexplicable ailment with seemingly no cure, the selfless noble fears his failing body will prevent him from updating the land’s archaic peace treaty. And his doubts only intensify when he meets his future bride… and discovers his heart beats far faster for her gentle servant healer.Torn between her master’s wishes and her curative duties, Persis can’t believe her eyes when she uncovers the mysterious root to the Prince’s crippling symptoms. And with Prince Haryk learning someone else wants him dead, he vows to do whatever it takes to protect his kingdom from hidden enemies.

Will Persis and Haryk’s forbidden love survive a powerful blight and bloody betrayals?

Peaceweaver is a standalone book in the heart-racing Between Blood and Sand romantic fantasy series. If you like dramatic intrigue, traitorous twists, and sweet relationships, then you’ll adore Everly Haywood’s captivating adventure.

I’ve been intending to read Peaceweaver for some time now, but somehow it always slipped through the cracks of an overflowing TBR. I’m so glad the mood finally struck!

Although it’s a Hades and Persephone retelling, I didn’t see a lot of parallels. That could be due to the fact that my familiarity with the myth comes from Martha Speaks (anyone else remember that PBS Kids show?) and Hadestown. There were a couple of elements, though, that felt familiar to the myth.

And don’t get me wrong! The originality was far from a downside, and the plot was captivating. It had the writing style of a classic fantasy novel with rich worldbuilding and compelling themes. Haywood’s style is poetic and vibrant, with descriptions that make the world and your imagination come alive. I found myself basking in the phrasing as much as I wanted to find out what happened next. It’s a trait that most modern fantasies lack, and I enjoyed being able to fall into a new world headfirst, a feeling that usually only comes from classic fantasy novels.

Persis is the epitome of a fantasy role model. She avoids all the modern fantasy foibles – obnoxious feminism, selfishness, invulnerability, and stubborn independence. Instead, she maintains a spirit of vulnerability, sincerity, selflessness, and determination.

The political aspects were one of my favorite parts as well. I always love court politics, and that plotline nicely offsets the intensity and interpersonal conflict of the main plot.

The one thing I wasn’t completely in love with: the villain’s motivation for hating the prince and line of reasoning were never completely clear to me.

However, I really enjoyed how Peaceweaver takes its time. It wasn’t the type of novel where I could skim the pages, hopping from action scene to action scene, and I found myself appreciating that.

Peaceweaver may not be the fastest read, but it perfectly combines humor and drama, and welcomes the reader in, leaving you wanting more.

Language – Fantasy swear words like “flames” and “shades;” a couple uses of “whore”

Sexual – Persis is called a whore by an enemy, and there are several references to couples sleeping together, but nothing is described.

Violence – There are some intense nightmares and a few descriptions of blood and wounds.

Spiritual – There’s magic and dark magic, but there is a clear delineation between the two. There are also a few uses of curses and spells, but again, a better distinction between good and evil will rarely be found in fantasy.

I received an eARC in exchange for an honest review. All thoughts and opinions are my own!