A Study in Terminal Review

A Study in Terminal Review 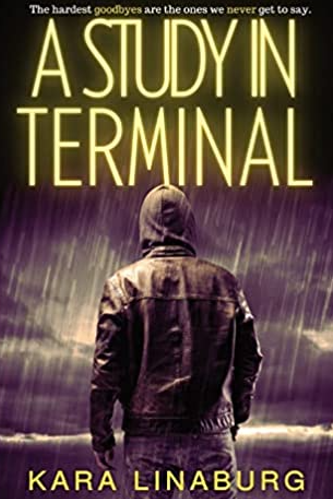 Categories: Contemporary, YA
Author: Kara Linaburg
Publisher: Monarch Educational Press
Greetings and welcome to my review of A Study in Terminal by Kara Linaburg!
4.9Overall Score

A Study in Terminal

Greetings and welcome to my review of A Study in Terminal by Kara Linaburg! Read the Review

Greetings! It’s been a while, huh?

Having ARC commitments has proved to be just the motivation I needed to return to posting!

Today, I’m so excited to share about Kara Linaburg’s newest novel, A Study in Terminal, on its release day!

I’ve read and loved her previous series, so I jumped at the opportunity to read this one too.

Without any further ado, on to the review!

Sean Brogan has spent most of his life running from a past he can never escape. Emotionally abandoned by his alcoholic father and secretly blaming himself for his mother’s death, the scars he carries are ones no one can see. On the anniversary of the day that changed his life forever, Sean flees New York City on his 1965 Triumph Bonneville, hoping to face the demons that plague his nightmares.

He plans to slip into the sleepy town of Lake Fort, West Virginia as quietly as he did ten years before, but his life has never gone as planned. Sean never expects to see Rina, the blue-haired sister of his childhood best friend who makes it her mission to rescue the lost things. A hopeful dreamer who sits on the roof and watches the sunset, she represents all the things that he has lost. As Sean spends time in the lakeside town that has haunted his dreams since he was a little boy, he has no choice but to face the pain that he buried from a life cut off too soon. In the blink of an eye, with a gun to his head, Sean is forced to confront what it means to fight for the will to live when your world has gone dark.

An anthem for those of us who have been left behind, A Study in Terminal is a vulnerable story about the human condition that reminds us that to beat your past, you first must turn around and face it.

This is not an easy book to read or review. As you can tell from the author’s content warning (see summary), A Study in Terminal purposefully tackles heavy topics. I read Kara’s Goodreads review of ASIT, and something she mentioned was how she read 13 Reasons Why and felt like it should have been done better so she did it herself. That intentionality shines through in the story, with care given to bring hope and light out of dark circumstances. Because of that, this story will resonate with so many people who are searching for hope or who have walked through similar circumstances to any of the characters. As hard as it is to read, I think these stories are also incredibly necessary.

Kara Linaburg poured her soul into this short novel, and the raw emotions are evident. The reader feels Sean’s pain deeply, giving the story an air of believability.

The characters are what drew me into the story, especially Rina. I loved her outlook, and her character arc might just be my favorite from the book. However, Sean’s arc is just as notable, and the ending was both heartbreaking and perfect.

Each nod to Sherlock Holmes made my nerdy heart smile a little, and I appreciated how they were woven in without taking over the story.

My one quibble with A Study in Terminal is that I wish it had been a little bit longer. As readers, we’re given the opportunity to see so much of Sean’s internal struggle, but I would have enjoyed some slower pacing through his life. The action was so fast-paced at times that I found myself wanting a little longer to process themes and moments. However, if nothing else, I think the desire for a longer book speaks to its quality.

Overall, ASIT was a fast yet heart-wrenching read that I’d love to revisit someday!

Spiritual – A Christian influence permeates the novel (and is done very well, I might add).

Other – Referenes to cigarettes, addiction, suicide, and alcoholism

Before I go, I’d love to offer one last very happy release day to Kara Linaburg!

If you love fantasy and heartfelt stories of redemption, check out my review for one of her other publications, The Crownless King !

I was given an eARC of A Study in Terminal in exchange for an honest review. All thoughts and opinions are my own.