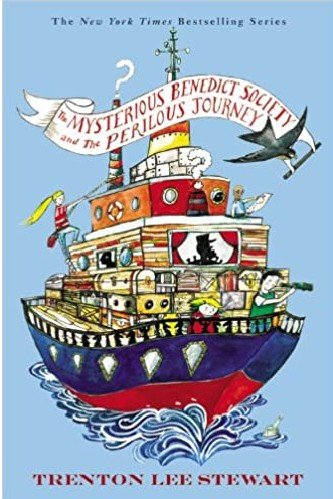 Categories: Middle Grade, Mysterious Benedict Society, Mystery, The Ones that Really Mattered
Author: Trenton Lee Stewart
Series: The Mysterious Benedict Society
Publisher: Little Brown Books
Illustrator: Diana Sudyka
*WARNING! This review may contain spoilers for the first book in the series!* The Society returns! When Mr. Benedict creates a scavenger hunt for the Society and then falls out of communication, the team fears he may have been captured by the nefarious Mr. Curtain! After all, they're both searching for the only plant that could cure their narcolepsy-duskwort!
4.8Overall Score

The Mysterious Benedict Society and the Perilous Journey

*WARNING! This review may contain spoilers for the first book in the series!* The Society returns! When Mr. Benedict creates a scavenger hunt for the Society and then falls out of communication, ...

WARNING! This book may contain spoilers for the first book in the series, The Mysterious Benedict Society! Haven’t read it yet? Check out my review here:

– Some of the villains occasionally “curse” without actually using swear words.

– There are a few fights and scuffles, but no gore, etc.

– Beginning in this book, Constance develops an ability to recognize patterns that res(such as when someone is approaching, etc.). There are a few references to hypnosis.

Witty and whimsical, this sequel reminds me of what made me love this series in the first place. Each character is flawed, and yet there’s little “gray morality” to get in the way of the adventure. I think there are different aspects of this book that mean the most as you grow up. I read this series for the first time when I was about eight or nine, and I was wholly entranced. One thing that stuck out then was how valued the members of the Society are. Mr. Benedict treats them with respect, as do the rest of the adults. Now, while I still fondly appreciate those moments, I also admire how the adults care and are involved while giving the kids freedom. The kids respect the adults, and when they do deceive them it’s never out of a place of spite or disrespect.

The theme of “found family” is another part that becomes more beautiful as you grow up. The Society members are like siblings by the end of the first book, and their relationships only grow throughout the series

The simplicity of the children’s friendship never ceases to be heart-warming. They trust each other without reservation, but they can also be annoyed with each other.

Sticky struggles with pride throughout this book and the subsequent ones. He may be a genius, but there’s a part of him that loves when others acknowledge it. In a way, it makes him feel validated. But he recognizes that flaw and strives to improve. Kate tends to embark on dangerous missions by herself, neglecting the willing help of her friends. Reynie internally struggles with the sense that he’s the leader of the team and believes that all of the pressure and responsibility lies with him. And Constance, well she’s Constance. If you’ve read the first book, you know her great power to irk. And yet they all show each other grace in their mistakes. In a lot of books, character flaws are unrealistic or unrelatable, but Trenton Lee Stewart does an amazing job of writing relatable characters.

They’re brilliant for their ages, but they still act like kids, which is also refreshing.

While this book (and the following two) lack the eerie tone and saving-the-world high stakes of the first book, it’s still entertaining and heart-warming. The friendship and self-sacrifice of the Society are some of the most prominent aspects of the series, and I love the relationships of all the characters.

I’m a part of the Amazon Affiliates Program. If you purchase The Mysterious Benedict Society and the Perilous Journey from one of these links, I may receive a small commission. Thanks so much!