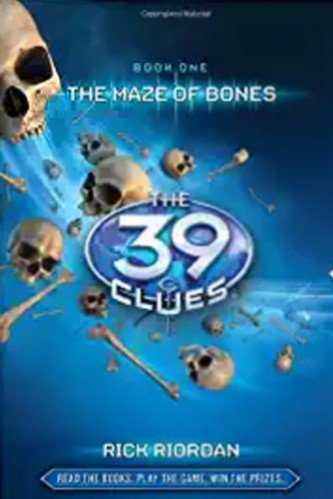 Categories: Action/Adventure, Middle Grade, Mystery
Author: Rick Riordan
Series: The 39 Clues
Publisher: Scholastic Inc.
Amy and Dan Cahill know what it's like to face challenges by themselves. Their guardian does the bare minimum and the only adult the truly connect with is Grace Cahill, their grandmother. But after her death, the siblings find themselves faced with loss and a difficult decision - accept their inheritance or follow 39 clues and dangerous paths to find treasure that could change the course of history.  Only problem is that their extended family…
3.8Overall Score

The Maze of Bones

Amy and Dan Cahill know what it's like to face challenges by themselves. Their guardian does the bare minimum and the only adult the truly connect with is Grace Cahill, their grandmother. But ...

Don’t get me wrong, this book is a fun ride and I genuinely enjoyed it.  Amy and Dan are relatable and funny characters. Riordan manages to capture realistic emotions that I remember feeling at their age.

Every twist and turn is exciting and fast-paced. although it’s geared toward a middle-grade audience, it’s still fun as an older teen. Fifth and sixth graders fascinated by codes and spies would especially enjoy The Maze of Bones.

Something random that grabbed my attention is how Dan cries after losing something that’s important to him. Too often (although there are, of course, exceptions) guy characters are snarky daredevils and never show any emotion except for anger (even if they’re young), so that scene was refreshing.

Every adult except for Grace is either unintelligent and clueless or a malevolent force bent on hindering the main characters.  While there’s no disrespect toward adults in general, as I get older these examples of literary adults are something I notice. Perhaps as I’m nearing adulthood, it’s encouraging to see adults who have some semblance of depth or character. Now I understand that that’s mostly to be found in classics or books aimed at adults, but I always appreciate seeing it in middle-grade/YA as well.

Also, all of Amy and Dan’s opponents are larger than life and like caricatures of villains. Anytime the kids are ambushed, the villain says something about how the kids led them right to the clue they needed.

A final thought. . . I loved the historical tidbits, and I think I’ll always remember * minor spoiler * that Ben Franklin’s pen name was Richard Saunders.  The more educational moments don’t feel forced or there simply for their own sake.

All that to say, this is a fun, entertaining read that sucks the reader in from the beginning. It’s not especially profound, but that’s okay. Sometimes it’s okay to enjoy an adventure and a mystery for what it is.

I would recommend this for ages 8 and up. There are a couple of creepy/intense moments in the catacombs, but I don’t really think there’s an age that would be too young for it or too old.

– A couple immature insults, but nothing too offensive

– God’s name is used in vain a few times.

Violence – None (with the exception of a couple fights)!

– Grace wears a green jade dragon necklace, and it’s referred to as a talisman and a good luck charm.

– Adults are generally seen as unhelpful, untrustworthy, or jerks

I’m a part of the Amazon Affiliates Program, so if you purchase Maze of Bones from one of these links, I may receive a small commission. Thanks! 🙂