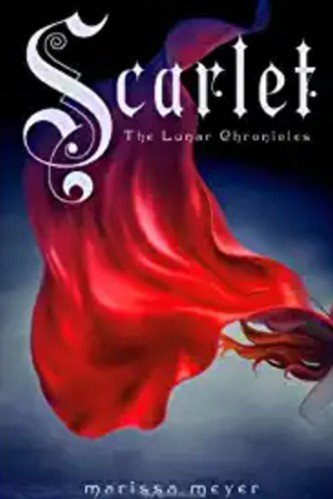 Categories: Dystopian, Retelling, Science Fiction, The Lunar Chronicles, YA
Author: Marissa Meyer
Series: The Lunar Chronicles
Publisher: Feiwel and Friends
This Little Red Riding Hood retelling picks up where Cinder left off. Cinder recruits a fellow inmate and heads to France to seek out someone who might know the truth of her past. Scarlet is reeling from the police report saying her missing grandmother's case has been closed. Suddenly, a strange street fighter shows up who may be Scarlet's only lead to find her grandmother before it's too late.
3.8Overall Score

This Little Red Riding Hood retelling picks up where Cinder left off. Cinder recruits a fellow inmate and heads to France to seek out someone who might know the truth of her past. Scarlet is ...

I almost didn’t review this book. I didn’t really enjoy it, and it almost made me lose interest in the series altogether. But I’d heard some pretty amazing things about the series as a whole, so I decided to press on and read Cress. And I’m so glad I did! It was one of my favorite reads of 2020 so far, and that left me with a dilemma.

I could either write a review that’d be a bit of a downer, skip to reviewing Cress, or just not finish reviewing the series. I enjoyed the third book so much, I decided I couldn’t give up on the series. But, this book is an important part of the series; without it, you’d miss a lot of character development and plot points. However, this book has a lot of content that I couldn’t skip over. So here we are!

As you’ve surmised by this point, I won’t have a lot of positive things to say about this one. But the way Marissa Meyer retells well-known fairy tales by staying true to the original and adding creative new elements and plots is captivating. Characters and stories become intertwined in an entertaining and original storyline complete with outer space and close friendships!

Scarlet, specifically, however, seemed to lag at certain points. Also, I wasn’t a huge fan of any of the new characters introduced (although that changed with the next book). Scarlet tended to annoy me, and Wolf wasn’t as compelling a character as I think he was meant to be.

I also wasn’t a huge fan of the romance in this book. It didn’t seem quite as grounded or true to the original story as that of Cinder, but I did enjoy the relationship of Scarlet and her grandmother.

However, the mysterious portions of this book were intriguing and enough to keep me engaged.

The major drawback to this book (at least for me) is the amount of content. It’s really not a shocking amount for a YA book, but considering how clean Cinder was, I was pretty surprised.

If you loved Cinder, and this review has made you question whether to continue on in the series, press on! Cress is an amazing and valuable addition to the series, and I’ll be reviewing it in the coming weeks. I’d recommend this book for ages 13+!

– Thorne (and other men) flirt with Scarlet.

– A wolf/man/soldier threatens to take advantage of Scarlet.

– Thorne looks at “naughty pictures” and has a naked woman painted on the side of his plane.

– Mentions of an affair that ended in pregnancy

– In contrast to the first book, Scarlet has a fair amount of graphic violence.

– Lunars manipulate bioelectricity, so their magic is more like mind control.

– People drink and get drunk.

– The occasional mention of suicide

I’m a part of the Amazon Affiliates Program, so if you purchase Scarlet from one of these links, I may receive a small commission! Thanks! 🙂