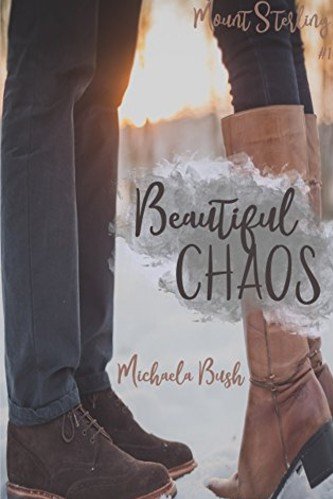 Greetings! Welcome to my review for Beautiful Chaos by Michaela A. Bush!Read the Review

Joanna’s never had it easy, but with college graduation a year away, there’s a light (and hopefully a job as a translator for the CIA) at the end of the tunnel. But then Walter, her childhood nemesis, arrives, and everything becomes much more complicated.

I truly didn’t intend to read this book as soon as I did, but I got it on Kindle during a sale and started reading it on a whim. And of course, I got hooked and had to finish the story (and the rest of the series, but that’s another review for another day). Plus, I loved the author’s most recent fantasy release, The Lady of Lanaria and wanted to read more of her work.

Additionally, contemporary and romance aren’t my usual genres. So if this review seems a little lacking, it’s most likely because I don’t have many reads to compare this to.

Joanna and Walter’s relationship is so adorable, and I love the unique twist on YA tropes. The romantic relationship does start fairly early on in the story, but their childhood relationship allows the reader to feel like it’s more realistic and less insta-love. Also, their sarcasm is adorable!

While we’re talking about relationships, I appreciate how the main romantic relationship is built on trust and realistic guidelines. They set expectations and boundaries before the relationship grows too intense, which is so rarely seen in Christian fiction. Although I haven’t read much contemporary, it seems like the majority jumps to physical aspects too soon or the couple never holds hands or even talks about expectations.

Redemption, forgiveness, and so many other important themes play a key role in this story, and the author expands on them throughout the series, crafting an impactful series.

Beautiful Chaos isn’t a small book clocking in around 500 pages, but I enjoyed the whole story, and I don’t think there was ever a time where I felt bored or like the story sagged.

The sacrificial love seen in Walter and Jo’s relationship is so heartwarming! There are some difficult, heavy themes presented in this series, but the darkness doesn’t overwhelm the light.

Before you read the content review, it’s worth mentioning that there’s both physical and sexual abuse in this story, but it’s handled with grace and nothing explicit is shown. Also, drug usage plays a role in the story, and *minor spoiler* there are multiple flashbacks to someone’s death by overdose *minor spoiler over*, so I would suggest this series for mid to older teen readers

If you’re looking for a sweet, Christmas-y/wintery read, check out this heartwarming read!

– Jo was physically and sexually abused by a family member in her childhood, and there are some flashbacks.

– Implications that minor characters are in very physical relationships/references to sex.

– Some catcalls/inappropriate flirting, but it’s not glorified or justified

Spiritual: Faith in and trusting God in the midst of difficult situations plays a large role in the story.

Check out Michaela’s latest release, The Lady of Lanaria!