Yesterday or Long Ago Book Review!

Yesterday or Long Ago Book Review! 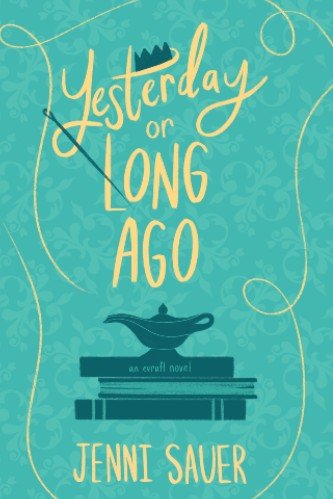 Yesterday or Long Ago

Greetings! Welcome to my review for Yesterday or Long Ago by Jenni Sauer!

Greetings! I’ve had the most lovely break, but now I’m ready to return, and reviews shall slowly be making their reappearance!

Today (May 12th) is the release day for Yesterday or Long Ago by Jenni Sauer!

“They’d write about her in books she’d never be allowed to read.”

Rinity Garrick isn’t allowed in the Liosi Royal Library, but that hasn’t stopped her from sneaking in every chance she gets. It’s there she meets Tov, the Librarian whose brown eyes are easier to get lost in than the stories she loves.

Things get complicated, however, when Rinity discovers the Librarian is actually the Crown Prince. And his friend, Royal Advisor Gibbs, never seems to be far from the Prince— and seems to have taken an interest in Rinity’s best friend.

Amya Cole knows better than to set her sights too high— a merchant’s son is all she needs to be provided for and still be useful. But the Royal Advisor quickly becomes an unexpected development in those plans.

When a mysterious man offers Rinity the opportunity to become the girl the Prince thinks she is, she must decide how far she’s willing to go for the answers she wants. Will the girls find their happy ending or bring Liosa down with them as they try to find it?

It’s Aladdin meets Pride and Prejudice in this romantic comedy about finding the love you deserve in the most unexpected places.

This book follows the author’s debut novel, Rook di Goo, but Yesterday or Long Ago can easily be read as a standalone. That being said, I do feel like I would have enjoyed this more had I read the Rook Di Goo (which interested me from its release, so I’m hoping to get to it soon!) before this one, which follows some characters from Rook Di Goo.

The characters and their motivations are my favorite part of this story! Each is layered, and I enjoyed how each fleshed out all the characters are. Rinity has flaws (and her propensity to make selfish decisions annoyed me at times), and they’re written realistically and with balance. I love how Rinity and Amya work as a team and complement each other’s strengths and weaknesses beautifully, which leads me to my next point!

While all the themes in this story shine, the element of friendship is what drew me into the narrative. Rinity and Amya’s friendship is so realistic, and in some ways reminds me of some of my relationships. The uncertainties and inner insecurities are painfully relatable, but the joys of deep friendship are just as prominent. Amya’s loyalty to Rinity even in the face of treason is touching. Even though the girls don’t completely understand facets of each other, they still respect each other. Their intimate friendship means they know the ins and outs of each other’s hearts, and the author portrays that level of friendship so well. It’s refreshing to read a book that includes romance but still focuses on friendship without layers of jealousy. Additionally, the girls both have unique characteristics. I especially love Rinity’s passion!

Apart from the friendships, all the relationships in this book shine! Amya and her little sister’s relationship is so sweet and true to life! Amya’s pride in Norah (her younger sister) is so wholesome, and the sibling dynamic shows more of Amya’s character while contributing some lovely scenes!

Another little part of the story I love is all the references to tea! As a tea drinker myself, the comfort of a steaming mug of tea should never be underestimated, and every time the main characters sought fellowship over a cup of tea brought a smile to my face.

My only complaint about Yesterday or Long Ago is how quickly the plot moves. Rinity falls for Tov so quickly, it’s a little hard to suspend the disbelief. Not that love at first sight is impossible, but she’s assured of his genuine heart after spending very little time with him, and I would have loved to watch their cute flirtations a little longer.

Overall, I enjoyed this sweet, quick read, and I’m looking forward to reading its predecessor. If I had read Rook Di Goo first, I think I probably would have found some little Easter eggs and callbacks to past events. The setting, while often vivid, is something I wish I knew more about (politics, the sci-fi aspects, etc.), and I think I’ll find that in Rook Di Goo. However, I was still able to follow the story and fall in love with the characters (especially Gibbs!).

Yesterday or Long Ago is ultimately a fun, sweet story about friendship, love, and a touch of treason!

– Some references to the late King, who was known for his infidelity

I received a free eARC from the author in exchange for an honest review. All opinions expressed are my own.

A very happy book birthday to Yesterday or Long Ago and Jenni Sauer!