Those With Ears Book Review

Those With Ears Book Review 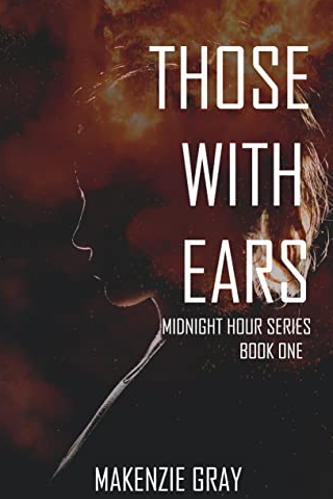 Greetings and welcome to my review of Those With Ears by Makenzie Gray!

Pandemonium, pandemics, panic, and no toilet paper. Seems like the last two years haven’t been that different from an apocalypse, right?

In Makenzie Gray’s new series, she explores the end times through the eyes of fifteen year old Takvi and her siblings.

What will Takvi do when the End begins?

In the blink of an eye, Takvi’s guardians disappear into thin air, along with thousands more. When the government swiftly moves to cover up the Disappearing, she and her siblings grapple with the truth behind what happened. They’ve been government loyalists their whole lives, but a split in opinions threatens to upend their lives permanently.

And Takvi is trapped in a vacuum where no solution leaves her or her family unscathed, which is the one thing she can’t bear.

The illegal book their guardians left them has answers that agree with her siblings, but Takvi struggles to accept it. When the newly-formed government tightens its grip in eerie prophetic fashion, will she stand up or will she fold? Will any of it matter in the end of the world?

A compelling apocalyptic story on redemption, sibling bonds, and seeking truth in a corrupt world, Those With Ears is the first novel in the Midnight Hour series.

First, a very happy (belated) release day to Those With Ears!

Michaela Bush is without a doubt one of my favorite authors I’ve discovered because of blogging and Bookstagram, so when she announced her new pen name and accompanying dystopian series, I couldn’t wait to dive in.

One of my favorite things about Those With Ears is that it follows the biblical account of what the Rapture will be like. In doing so, there’s a layer of uniqueness that separates it from other YA dystopian reads. As a dystopian story written from a Christian perspective, one can’t help but compare it to the Left Behind series. However, this series is distinct in the modern setting. As much as I love the Left Behind series, much of the technology is within the confines of the late 90s and early 2000s when it was written. It’s some of the only post-Rapture books I’ve read, so I’ve never thought a lot about how the story would change in our day. Gray masterfully weaves in the political tensions and modern technology of our day, making Those With Ears an engaging Left Behind-esque series for the new generation. On that note, the political deception is done remarkably, and I really enjoyed watching Takvi question her perception of truth and the media.

One complaint I’ve seen about the series so far is Takvi’s personality. In fact, many of the characters in the opening chapters are grating, and I too found myself wondering how much more I could take. But by the end of the first few chapters, I was hooked. Just by the end of the first book, Takvi’s undergoes some massive character development, and I look forward to watching her grow throughout the series.

My favorite part of this series (and something Makenzie Gray always blows me away with) is the relationships, especially between siblings. The sisterly bond between Takvi and Isabeau is so accurate, and every time I resumed reading, I was reminded of how amazing sisters are (and found myself missing my own a little more).

The stakes are high throughout the story, both spiritually and physically, both of which pack an intense punch as tensions rise.

At 238 pages, Those With Ears is a fast, short read that you could easily finish in a day. It was originally published on Kindle Vella and then published in print form, and that can be evident in the pacing of the story. At times, it feels like a novella, and I found myself wishing it was just a little longer to build more relationships with side characters or embrace the worldbuilding. Nevertheless, I can’t wait to read the next installment, and I hope I don’t have to for long!

Language – One or two uses of the British curse word “bloody” and the occasional “dang,” etc.

Violence – Some fight scenes, gunshot wounds, etc. but nothing grotesque. Also notable, there are a couple of references to a teenager having been abused.

Other – Brief mentions of alcoholism.

I received a complimentary eARC in exchange for an honest review. All thoughts and opinions are my own.

If you haven’t read Michaela Bush’s other work, be sure to check out my reviews for them!

The Lady of Lanaria Book Review

And check out the cover reveal for the anthology she’ll be a part of that releases March 1, 2022!

That’s all for now so farewell and happy reading!