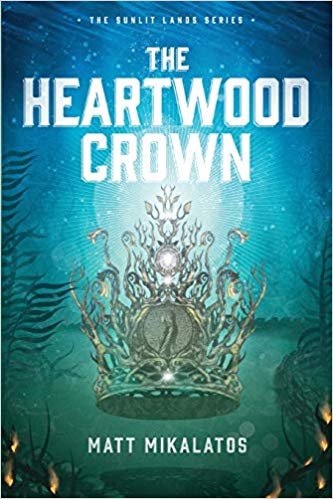 Categories: Fantasy, YA
Author: Matt Mikalatos
Series: The Sunlit Lands
Publisher: Tyndale Wander
Warning! This review contains spoilers for the first book in the series, The Crescent Stone! Madeline Oliver is back in our world, but her health is quickly failing. The Sunlit Lands are desperate for healing. Some would have the magic reset, others would have it renewed in favor of the Eleneil, and the Scim want its power to seek revenge against the Elenil who enslaved them. Madeline searches for a way to return and reset the…
4.7Overall Score

Warning! This review contains spoilers for the first book in the series, The Crescent Stone! Madeline Oliver is back in our world, but her health is quickly failing. The Sunlit Lands are ...

Warning! This review contains spoilers for the first book in the series, The Crescent Stone! Haven’t read it yet? Check out my review here:

– Many characters suffer wounds, but nothing is graphically described.

– Necromancers are talked about in the previous book and introduced in this one. However, it turns out that there’s nothing spiritual about them *MINOR SPOILER* Instead, they’re the only literate beings in the Sunlit Lands, and reading is seen as communicating with the dead because they have the ability to read about those who are now dead. *MINOR SPOILER OVER*

– There’s some magic used (but it’s seen more as a part of the world and not anything resembling witchcraft or anything spiritual).

This book is an excellent follow-up to The Crescent Stone! Mikalatos builds his world involved intricately and beautifully. Its mythology and legends are engaging and entertaining. With both books, I nearly set them aside after reading the actual story, but I’m so glad I ended up reading the lore in the back of each of them.

Every culture in the Sunlit Lands has a distinct mythology and detailed traditions. One book series Madeline reads (that eventually plays into the plot) feels so real that I couldn’t help repeatedly googling and checking on Goodreads to make sure it wasn’t actually a published series (because I desperately wanted to read it if it was).

The character development in this series is amazing. Every character is unique and draws you into the story. As with the first book, I feared the growth of a love-triangle. However, I was pleasantly surprised by the absence (well, mostly) of relationship drama. Mikalatos skillfully crafts relationships and is an example to many YA authors today that quality platonic relationships are possible without feeling awkward or forced.

Race and equality are both major themes in this series, but they are discussed nationally and don’t feel obnoxiously forced.

This series is an emotional roller coaster that will leave you reeling and thinking about the ending months afterward. There hasn’t been a release date set for the final book in the series (that I’ve been able to find… If you found one, let me know!!!), but I can’t wait for the conclusion to this amazing trilogy.

I’m a part of the Amazon Affiliates Program. If you purchase The Heartwood Crown from one of these links, I may receive a small commission. Thanks so much!