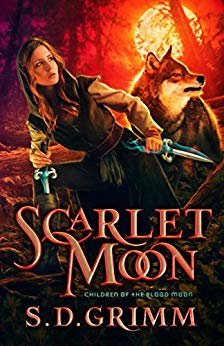 Jayden's biggest concern is her nearing betrothal to her childhood best friend, Ryan. But after "Feravolk" raid her village searching for her and any other Children of the Blood Moon, she finds ...

– The evil prince has mistresses he forces to sleep with him.

– He also tries to seduce Jayden.

– There are references to the Creator (representing God), Destiny Paths, fate, prophecy, and the occasional spells used by forces of evil.

Although Scarlet Moon sometimes has a dark/heavy tone, it is still heartfelt and well-written. I always enjoy when authors include talking animals, and the idea of animals bonded (able to share thoughts and senses) to humans is executed well.

The different aspects of the magic system help the story feel unique and intriguing. Children of the Blood Moon each have different combinations of powers (mind-reading, super speed, super strength, etc.), allowing the reader to wonder what will be revealed next.

However, there are some angst-y moments that younger readers might not enjoy as well as some…well…steamy moments so I would recommend this book for teens and up. The world-building feels a little underdeveloped at some points, but on the whole, I enjoyed Scarlet Moon, and I look forward to finishing the series! Some questions are left unanswered, but I’m sure some will be covered in the subsequent books.

I’m a part of the Amazon Affiliates Program. If you purchase Scarlet Moon from one of these links, I may receive a small commission. Thanks so much!