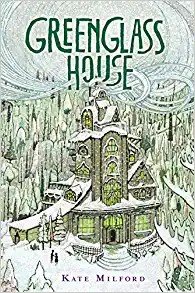 Categories: Middle Grade, Mystery, Youth Fiction
Author: Kate Milford
Series: Greenglass House
Publisher: Clarion Books
Milo was looking forward to a quiet Christmas break filled with family traditions and time spent with his adoptive parents. But when guests start appearing unexpectedly at his family's hotel often frequented by smugglers, it becomes clear that this will be a Christmas like no other.
4.3Overall Score

Milo was looking forward to a quiet Christmas break filled with family traditions and time spent with his adoptive parents. But when guests start appearing unexpectedly at his family's hotel ...

– A character introduces Milo to RPGs (role-playing games), and her character is a “scholiast,” which in the game means that she follows around angels and has “unearthly powers.”

– A man smokes a pipe quite often.

There’s just something about middle-grade mysteries. They tend to be atmospheric and occasionally eerie while never straying from the confines of PG territory. They’re usually random (in a fun way), and the characters are interesting and sometimes relatable. All of the above are traits that Greenglass House encapsulates.

At the end of this section of the review, I’ll discuss a plot twist in spoiler-y detail, as it’s part of what’s discussed in the “Spiritual” section of the Content Review. It makes for an extremely surprising and interesting plot point, but as some parents might find it a bit much for their reader, I’ll discuss what it adds to the book and how it affects the story. Also, if you decide to give Greenglass House a read and want to see my thoughts on this plot twist, you can check back here. Just a heads up and I’ll give you a warning before I delve into some spoilers.

The characters in this mystery are the aspects that shine brightest. I really liked Milo as the main character. He has struggles that many kids can easily relate to, such as a hesitancy to accept change and a nagging curiosity as to his birth family and background before he was adopted. However, the author weaves these themes into the story without detracting from the storyline.

Milo’s parents are involved in both Milo’s life and the story, a refreshing contrast to stories where parents are dead, missing, cruel, or unhelpful. They genuinely want to aid their son and show him how loved he is, regardless of whatever doubts or questions he may have.

Milford’s use of the role-playing game lends a unique aspect to the story. It’s all too easy for a writer to allow characters to shift mindsets and traits as necessary for the plot. For example, a character terrified of monsters might suddenly muster the courage to face one. And while courage can be an important theme, that scenario can also feel a little too convenient for the reader. However, Milo’s character as a person is so perfectly and yet partially intertwined with his RPG character that it very creatively shows the reader both who he is and who he wishes he could be. This also makes his character growth feel, perhaps, feel more realistic.

Another feature I found enjoyable is the use of nuanced folktales and the like to convey parts of the plot and motives/characteristics of the guests.

The writing is engaging and as the book progressed I found myself turning the pages more and more quickly. At the beginning of the mystery, as much as I was intrigued by the concept, it felt a little slow. But as the plot progresses, so does the action and sense of urgency.

One last detail I found a little strange is how it’s never said exactly how all the guests are arriving within such a short time frame. While each character has their own secretive reasons, it seemed a little too coincidental that paths would all meet at the same time.

Regardless, I found every character (even the side ones) entertaining, and this middle-grade mystery kept me guessing at every turn.

Scroll past the Amazon Affiliate links if you’d like to see the spoilers! Read at your own risk!

I’m a part of the Amazon Affiliates Program. If you purchase Greenglass House from one of these links, I may receive a small commission. Thanks so much!

Okay, this is your final warning! Spoilers from here on out!!!

Meddy, Milo’s newfound friend and companion for much of the book, is revealed to be a ghost. Her father was killed years prior, and as much of the mystery involves him, she has decided to haunt the Greenglass House and aid Milo in his quest.

I definitely have mixed feelings about the fact that she’s a ghost. While I appreciate the plot twist and how it was hidden from the reader for so long and then tied in so seamlessly, it did seem a little strange and I feel like it could have also flowed without her being a ghost.

Reviewing middle-grade books is always a bit of a challenge for me. While I love reading them and enjoying them for their quirkiness and charm, I’m a teenager so I’m also a little bit out of their target demographic. So I try to be sensitive to the fact that some aspects that don’t greatly affect me might greatly affect a reader a few years younger. For example, had I read this book when I was 10-ish, it probably would have been a wee bit too spooky for me (but then again, I was a pretty sensitive kid). All this to say, if you’re a parent reading this, you know your reader best. I just wanted to make you aware of that spiritual aspect.

As a teen, I view her ghostliness much as I view the slightly supernatural aspects of Phantom of the Opera and fantasy novels – an interesting plot point. This little section has become very rambly (sorry!),  so I’ll wrap it by saying that the only real downside (for me) to this plot point is that I was expecting a classic mystery and not magical realism. I suppose the big reveal was more of a shock than a disappointment, and as the book brings up some important themes and is so beautifully crafted, I think (for tweens or teens), it’s worth the read.

Thanks for sticking with me through all that! If you’ve made it this far, 1) I have no idea how; your patience is astounding, and 2) I hope that was at least a wee bit helpful. Until next time!